You can download an extract of this video by selecting it with the yellow arrows, and then adding it to your basket. 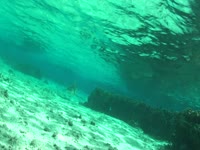 The Chesterfield-Bellona atolls and reefs are a vast reef complex located in the Coral Sea Marine Park, established in 2014 in the New Caledonian Economic Exclusive Zone. In 2013, the New Caledonia government supported the first assessment of fish and benthic habitats conducted over the entire area. The assessment provided a primary knowledge base for establishing the importance of these atolls in terms of biodiversity and fished resources. This comprehensive survey relied on an unbaited underwater video technique that enabled to collect 185 successful camera drops distributed over all shallow habitats in the atolls.

The sicklefin lemon shark Negaprion acutidens was observed at the Chesterfield atoll in the Live Coral habitat; it had only been reported once in the same area (Clua and Imirizaldu 2017).

This species is classified as vulnerable by IUCN.